The Kinetic Space Middleware provides a tool which allows everybody to record and automatically recognize customized gestures using depth images as provided by the Kinect sensors. The software observes and comprehends the user interaction by processing the skeleton of the user. The unique analysis routines allow to not only detect simple gestures such as pushing, clicking, forming a circle or waving, but also to recognize more complicated gestures as, for instance, used in dance performances or sign language. In addition it provides a visual feedback how good individual body parts resemble a given gesture.

Six highlights of the software are that the gestures:

The software has already been used by media artists, dancers and alike to connect and to control a wide range of third party applications/software such as Max/MSP, Pure Data, VVVV, Resolume, etc. via the OSC protocol. The software is written in Processing and based on SimpleOpenNI, OpenNI and NITE. 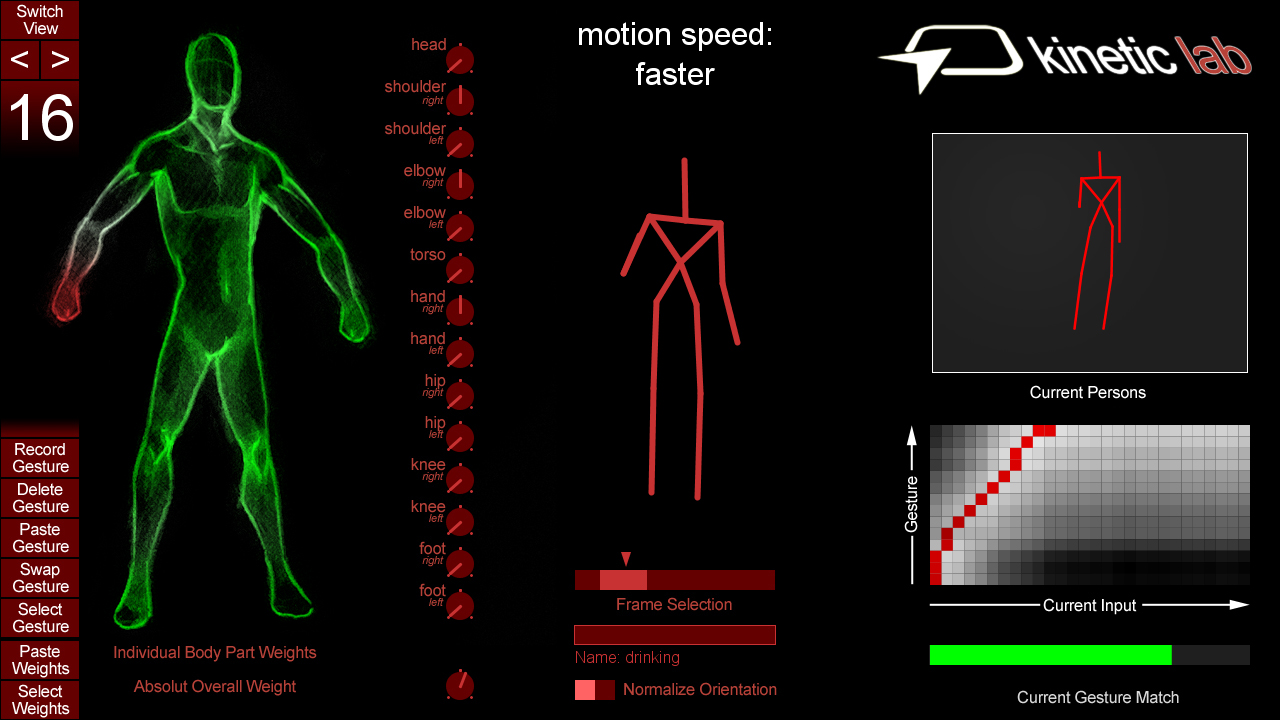 What the Press is Saying
For all of you that found yourselves wanting to use Kinect to control something but had no idea what to do with it, or how to get the data from it, you’re in luck. Kineticspace is a tool available for Linux/mac/windows that gives you the tools necessary to set up gesture controls quickly and easily. […]
– Hack a Day 2012/06/11

[…] What is it good for? Well, it can read a gesture from one person and register it on another and you can train it to register tiny movements and, potentially, allow for full motion control of your PC. Minority Report it isn’t, but that future is getting closer and closer.
– Tech Crunch 2011/08/05

Map your gestures and have it ready for other people to use and make reference of. The Kinect Spaces is a gesture recognition and mapping software that gives programmers a reliable tool in creating and saving gestures via Kinect for their software use. This video by Matthias Wölfel shows us the nitty-gritty details of the program as well as how the Kinect Space can prove to be valuable to all Kinect hackers out there. […] This is indeed a great addition in further enhancing the Kinect controls!
– Kinect Hacks 2011/07/21